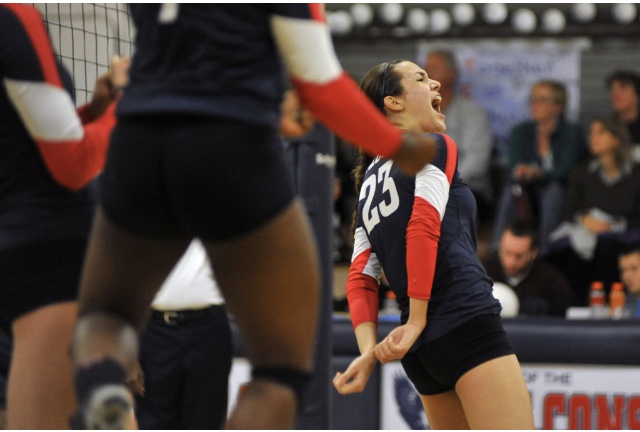 The student has now become the master, but it did not happen overnight. In fact, for 2016 alumna, Alicia Borges, the journey from high school athlete to aspiring collegiate head coach has been nothing short of a process. Freshly graduated with a degree in Psychology with a minor in Theology, Borges is on the path to use her knowledge of sports psychology and deep roots in volleyball to pursue a career as a head coach at the collegiate level. The Borges name may ring a bell, as current PE teacher and volleyball coach, Mrs. Borges is Alicia’s mom and former high school coach. Alicia Borges was a part of the 2013, 2014, and 2015 volleyball section winning teams. As a four year varsity player, she received countless accolades like multiple All League honors, 2015 Sierra Delta League MVP, and 2015 Sac Joaquin Section Championship Player of the Game. Riding high off of high school achievements, Borges went on to play volleyball at William Jessup University in Rocklin, California.

Unknowingly, Borges encountered an enduring test of character and resiliency for the majority of her collegiate volleyball career. Significant challenges began to present themselves through multiple avenues. Not only was Borges plagued with injuries, she was recruited as an incoming setter, however, that did not come to fruition.  In response to unfulfilled agreements and uncertainty in the future of her volleyball career, Borges questioned her own abilities. “Once I made it to my senior year of college I finally realized the immense struggle that I had endured during my first three years with my first coach.”

“Over the years I was continuously asking if I wasn’t good enough because I wasn’t playing as much as I thought I would be. But then senior year came around with a more experienced coach, and I was starting. I couldn’t wrap my head around it because I was telling myself that it was me – that I wasn’t good enough, but then everything changed.” Borges expressed that she realized it was never about her skills.

Rather, she had to focus on working to the best of her ability for her own satisfaction. As the circumstances were beyond her control, Borges tirelessly worked for her spot and dealt with recurring disappointment. Finally, she received the court time she deserved.  “I just wanted to play volleyball and have fun winning, and my new coach finally gave me the chance to fairly win my spot.”

By senior year, Borges was starting. Quickly, that starting spot morphed into a six rotation spot. “I was able to show my abilities and leadership on the court, and that sparked the questions in my head about the past years.” Borges coined these trials and tribulations as something she was meant to face. It was tempting for her to think of other paths she could have followed to avoid the hardships, however she trusts that God led her to Jessup because it was where she was meant to be.

In fact, the difficulties Borges faced directly inspired her passion of becoming a coach. “I think the biggest lesson I have learned after graduating high school would be how I want to be as a coach. I had a coach who was demeaning and would suppress our voices and ideas. I came out of that season with determination to be open minded and to always listen to my players. I learned firsthand that a player will never be able to give their all for a coach that they do not respect. “ The graduate shared she hopes to be a leader that provides guidance with grace for errors; one who encourages and builds her players up. Borges confessed her experiences at Jessup have made her realize the type of character she has always wanted to hold as a coach.

As Borges moves forward into the professional world, she anticipates volleyball forever being a part of her life. After all, volleyball is in her blood. “It has always been a part of me, and with my family being who they are, I probably will never lose touch.” Borges looks forward to helping her mom coach in the upcoming school year as well as jumping into the club scene. “I want to connect with athletes and give them a place to get out frustrations and just let loose in a sport that they love. Volleyball was always my outlet and I am just hoping that I can create a team environment where we all can become a unit and look to each other for support and guidance. “

Borges champions aspiring student-athletes to believe in themselves, even in the face of those who doubt their abilities.

“Take negative energy and create a drive within yourself to prove that you are not only good enough but that you belong there.” She urges athletes to stay positive in the face of struggle and push through whatever comes their way. “You are in charge of how you handle difficult times, and how you handle them speaks volumes to your character. Skills will carry you through sports for some ways but your character will push you into real life and will make a mark wherever you go.”

From Alicia Borges to her Vacaville Christian Community: My motto for my college career was, “God gives you what you can handle,” so if you are going through a lot then God thinks you are pretty strong, and that is all the reassurance that you need to keep going. Don’t stop in a struggle, keep going and get to where you feel proud of and once you get there keep going, because only God knows what you are capable of and it will shock you, believe me. 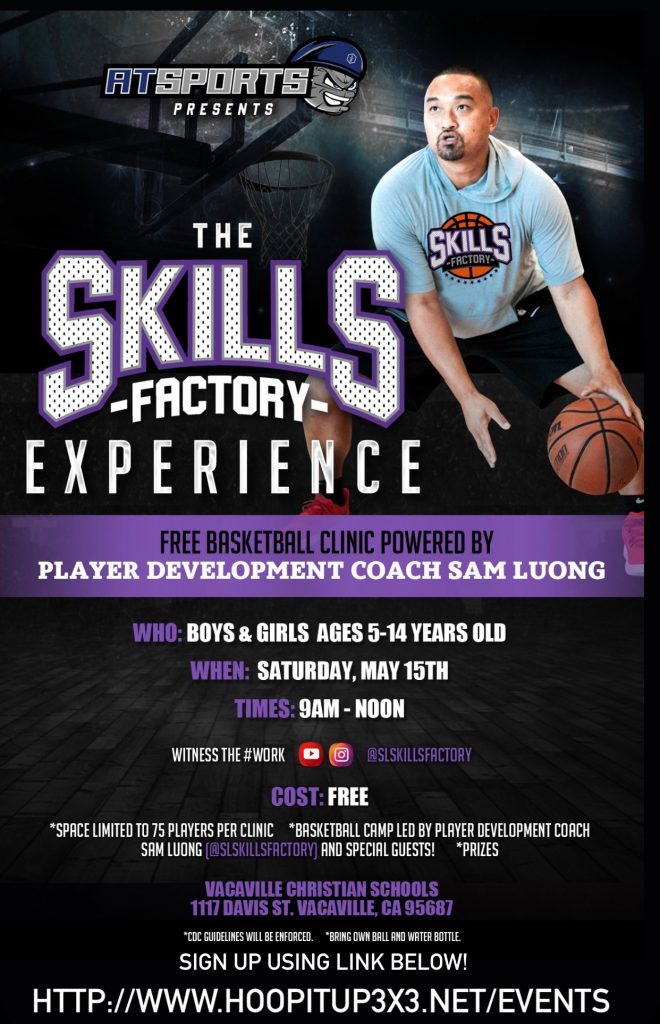 Don’t miss out on this opportunity! The deadline for VCS free access is Friday April 30th; once this deadline passes, the clinic will open up to non-VCS kids.

The Skill Factory Experience offers player development with Coach Sam Luong. CDC guidelines will be enforced, and each player will need to bring their own basketball and water bottle.